Violet, do you have beer in your bedroom again?

"Violet, do you have beer in your bedroom again?" And no...I'm not talking to my 21-year-old daughter. She's 2. What can I say? I'm practicing right now for our future talks.
This morning I went into the girls' room, and immediately smelled beer. Byron mentioned something about it the day before, but I couldn't smell anything at the time. Besides, their room had been *thoroughly* cleaned just 2 days before. Today though? REEKED of beer. Like the party back in the day that I went to where some stupid girl poured beer all over me and my leather bomber jacket, and then I had to walk home, and then I told my parents I fell in sewage instead (to explain the beer, sticker burrs and mud all over me). Yeah, I was a *great* liar back in the day....and you *so* know they believed it. I digress.
I started picking up random things in the girls room and smelling them, trying to diagnose the problem. I finally got around to the play kitchen, moved the little table out of the way, and found this: 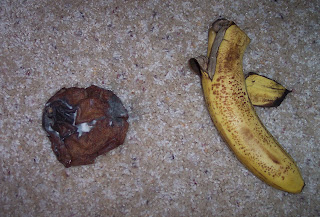 Notice how I used the banana for scale, so you could see the actual size of said mystery object. Okay, actually I found the banana in the room too, but isn't it cool how the 2 foods were sitting just like that so I could attempt to use it for an excuse? 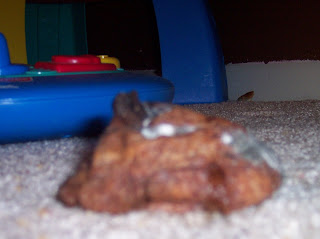 A photo from Ground Zero. Notice the height of the object. I think there's a small stem in it too.
I asked Violet what it was, and she said, "Itha uh-may-tah. Now. Put ith in my fidja-ratr.", and she politely opened the door. Translation: It's a tomato. Now. Put it in my refridgerator. 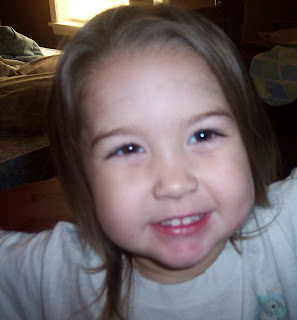 First one to correctly identify the mystery object gets to keep it!
Posted by Ashley H. at 6:18 AM No comments:

Every time my family gets ready to leave from home, I tell the girls to go outside, get in the car, and put their seat belts on. No matter what I threaten them with (grounding, taking toys away, spanking, etc.) they *never* go straight to the car. They always chase after the cats and dogs, ride their bikes….*anything* to avoid doing what I asked them.

Why would I think this morning would be any different? Byron had already left for church, so I herded up the children and had them heading to the car. The girls, as usual, didn’t get in the car like I told them to, so I was already mad. I was slightly relieved by the fact that it took me less than 10 minutes to get them in and go.

I got about a mile from home when I heard Duke gagging. I looked in the back seat to see Violet with her fingers in his mouth, so naturally I told her to get them out. She’s been known for sticking them in there before, trying to get him to “bite” her. After she took her hand out he was still gagging, so I started slowing down to pull over. Then Violet shouted, “My key! My key!” I’m pretty sure I had my first coronary right at that moment when I realized she had shoved “her” key in his mouth. Where did she get the key ,you might ask. I would sheepishly reply, “Well, Violet was making noise and crying for some keys to play with, and I didn’t have her key ring with me. Instead I just gave her a key I found in the cup holder to shut her up.” I had just said I couldn’t drive with all the noise, and was doing anything to keep them quiet. Just in case you’re in this situation in the future….never give your 2 year old a key….ESPECIALLY if they’re sitting next to their 5 month old brother.

I was still going about 40 mph, but by this time the he wasn’t making any noise. I whipped the car over into the nearest ditch, jumped out, and jerked him out. When you’re in a hurry, those stupid car seat buckles are impossible to get off. I turned him upside down on one arm, and hit him as hard as I could in the back. His eyes, nose and mouth were purple. Look, I’m LOVING the color purple in my hair, and even in a shirt. But on my child’s face? Not attractive.

I was still out in the middle of nowhere, and there were only 2 houses nearby. I picked the one with the shorter driveway, but it was still a good ¼ mile. And then I started running, and kept running until I fell down. Jumped back up, kicked off my flip-flops, and kept running. Ran into their dogs, and kept running. I’m not exactly sure what they thought about some crazy-purple-haired girl running down their driveway with a baby, but I know if I ever saw something like that, it would scare the ever loving tar out of me! Finally I made it to their house, and rang the doorbell a million times over. The residents, a man and woman, ran out to help, thinking I’d had a car wreck. When they figured out what was going on, we all ran inside and they called 911. I kept beating Duke on the back trying to get him to breathe, but we never saw the key come out. The operator stayed on the phone with us until Duke started breathing good again, and they asked me to take him to the hospital.

The lady, Al Sumpter, drove me back out to my car, and my girls. Did I already mention I left them in the car with it running? I knew they couldn’t go anywhere, even if they put the car in drive, because it was STUCK in the mud. I figured with my luck a cop would drive and I’d get in trouble for leaving children unattended, but that didn’t happen. Both girls were still in the car. Violet was swinging from the grip bar and playing, and Gracelyn was crying. Gracelyn informed me that Violet needed to pee, so she just went all over the back seat. Lovely! Then Violet said, “Where’s my key?!” Sounds about right. My car had sunk further into the mud, but Mr. Sumpter went and got some chains to pull me out. I will be forever grateful to that couple!

I took Duke to the GSMC E.R. They got him back pretty quickly and took an x-ray. They’d already discussed how they’d have to get the key out, which would require him being put under, and using a scope, or doing surgery. Neither seemed to appealing to me. See how upset Duke looked by the whole ordeal? Obviously VERY stressed...lol. 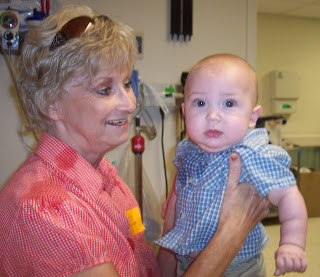 The doctor came back with the x-ray results, and finally told us…NO KEY! He said it must’ve flown out one of the times I was hitting Duke in the back. I have never been so relieved in my life!

This afternoon’s plan? To find every spare key, change, or any other small part lying around and throw it away, or put it up and away. My kids will have to think of some other creative way to have me institutionalized!
Posted by Ashley H. at 12:59 PM 1 comment: