The Duke and Baby Drama

Yesterday Baby Duke seemed to be doing well. He had made improvements in the amount of oxygen he was requiring, and was holding steady around 30-35 %. Everything was going well, the night was pretty quiet, when some moron doctor decided to piss me off.

This doctor WAS NOT my baby's doctor, NOR was he covering for someone else or on call. He should've never seen my baby, period. When he walked in he was very nervous, talked quickly, and couldn't sit still. Then he told me his name, and I immediately didn't like it. He was the SAME moronic doctor that diagnosed a friend's baby with like 5 different fatal brain disorders, kidney disorder, and all sorts of other crap because he's so crazy. Even sent her, with her baby, to see all these specialists in Dallas to find out what? There was NOTHING wrong with her baby in the least.

He starts telling me that he was paged to come and check on Duke, and he'd taken a turn for the worse. He said Duke couldn't breath at all, and made it seem as though Duke were near death. This whole time he's sitting, squating, standing back up, looking in his bag, acting like a total crack head. He said Duke needed to be put a ventilator because he couldn't breathe, might need some other meds, etc, and made it sound like I had in choice in what was going to happen next. By the end of the conversation I asked if I could go see Duke, and then the idiot doctor said, "Well, you might want to call the nurses and make sure they're finished intubating him." WHAT?????Of course I freaked out. That doctor ran off so fast,almost like he didn't want to get in trouble if someone saw him in my room or something. I call Byron, repeat what the idiot said, and he got all upset too and started driving back up to the hospital.

About 30 minutes later the neonatologist stopped by. He's the doctor for the sick or preemie babies. He was VERY calm, and after talking with him, things didn't seem quite as grim. He said Baby Duke never got worse, and never had trouble breathing. He said he was staying the same, which was fine, and they could've waited another few days to see how things progressed. Then he told me that Duke was intubated because that was the ONLY way to administer the new medicine....not because he wasn't breathing well. He also said that after the vent was used to give the medicine, it starts working nearly immediately, and they can be taken back of the vent within 12-24 hours. MUCH better news.

We went to see Duke last night and it was a bit upsetting to see all these tubes connecting to one large piece, and then a tube going down his throat, one in his nose, etc...but the monitors on his oxygen and breathing levels all looked quite a bit better.I called to check on him this morning around 4 a.m., and he was already doing better on his oxygen, holding steady at 26%. Room air was the main goal, and that's 21%.By the time I went to see him when the NICU "opened" this morning at 8 a.m., he was on room air! What a miracle! Then they started weaning the pressure that was on the vent.

About 30 minutes ago they did a blood gas test, and won't have to do more bloodwork to check his levels until tomorrow morning. The NICU is "closed" right now, and opens again at 7 p.m. They said I'd finally get to hold him for the FIRST time, and feed him too!!!! We are SO BLESSED!!!!!!

I get to go home tomorrow, and Duke will likely be transferred to the regular nursery by then. If things keep looking up, he'll be able to come hom on Friday!!!!!

Thank you, everyone, for your prayers...even if you didn't happen to know about what happened last night. I was so drained (emotionally, physcially, mentally) after all that we've been through in the last week that I just couldn't make myself post an update or do phone calls. Please continue to keep The Duke in your prayers. :) 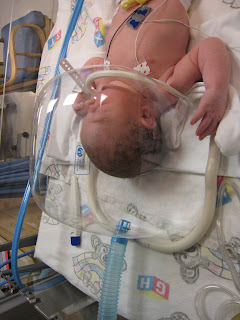 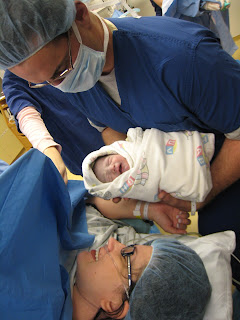 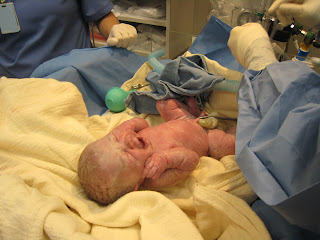 I would LOVE LOVE LOVE for each and every one of you passing by this blog to take a minute and consider signing up to be a shavee this year for the St. Baldrick's Foundation, which raises money for pediatric cancer research. You set the goal, and if the donations meet your goal, you shave your head. That's all there is to it!

Just think...no more bad hair days, at least for a long while. No excuses about vanity. I'm a mother of 3, with 1 on the way, and I could always use a little extra time. By shaving my head, I'll save at least 20 minutes every morning "doing" my hair. Not to mention the main cause of bringing about awareness to pediatric cancers, and life-saving research!

Just go to www.StBaldricks.org and find an event near you!

My mom can squirt milk out of her boob.

“My mom can squirt milk out of her boob.” Those were the exact words my 5-year old used to enlighten an elderly stranger in the checkout line at the grocery store. When in public, she gets pretty shy, and either pretends you don’t exist, OR gives you the classic “go to hell” look. I’m fine with either of these, but of course, she had to go and show off a few days ago.

It takes a lot to upset or embarrass me, but I did get a little pink in the cheeks trying to get Graceyn to shut her fat mouth. It went something like this:

Old Man: Hi! You sure are a cutie!

Old Man: And it looks like you’re going to be a big sister soon. (pointing to my belly)

Gracelyn: I already AM a big sister, but I’ll be another big sister when this baby gets here. They’re going to cut him out of my mom’s belly in a few days.

Gracelyn: And you know what? My mom can squirt milk out of her boob. The other day my mom was fixing her shirt, and there was a big wet spot on her shirt and I was like, “Mom, what’s that comin’ out of your nipple?” (She learned the word nipple last week and has tried to use it in every conversation since then.) And my mom told me it was milk for the baby. And I was like, “Oh that’s SOOO gross that you have milk in your boob. You could, like, squirt somebody in the eye with that, and that would be really funny."

Gracelyn: I’d be like, Quentin, you better quit messing with me or I’m gonna tell Mom to squirt you with that milk.

Old Man: Suddenly remembers he needed a few more items from the store, and walks away.

Yeah, out of the mouths of babes. Gotta love ‘em! And by the way….I’m available for parties.
Posted by Ashley H. at 8:16 AM 1 comment: