Everybody needs a cop-out now and then...

So I suck. Get over it. I'm totally lame, and haven't have *time* (AHEM thank you four spawn of my womb, insane job, flat tires, puking, dirty house, gymastics, cheer, American Idol, Dancing with the Stars, House, sleeping, reading, and the Antichrist)....so I'm completely cheating and will just post some of my recent status updates from Facebook. I PROMISE to actually put some time and effort into writing something witty (or completely useless and pathetic) for the blog this weekend.

Here's a recap of my activites as of late:

Lame-o SD camera cards can suck it. Why do I spend *countless* hours...nay, days (!) to get a decent picture of kids (or the dogs. or a sunset. or the puke ever-so-carefully *placed* across the living room and down the hallway and all over the bathroom. pretty much every place BUT the toilet or trash can) just so I can get to work EARLY (because I'm dedicated that way) just for the card to tell me it won't work?!?!

Check out the growth on my new hair, yo. And baby, this isn't rogaine...it's *genetic*. Suck on that! 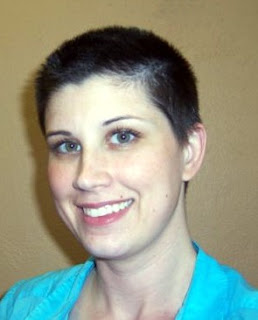 Why is it that right when I start singing in the car, someone has to talk to me? They come right out of the woodwork, and all *I'm* trying to do it sing a little. It's not every day that you get a chance to belt out Rock Lobster, ya know.

So I got these super-cool contacts in...they flipping *Sparkle* like nobody's biz. I look like a Cullen, so you know I'm a sexy beast. Or at least that's what I'm telling myself.

Although Duke can't see more than 12 inches away from his face, he can still sense when I walk through the door of my office. He immediately starts screaming. Thaaaaaannnnkkkkssss.

I'm pretty sure there's a ghost in the bedroom with me. I'm hoping after I go to sleep it'll fold the flippin' clothes. *Ahem* GHOST: If you're reading over my shoulder, get lost. I know jiu-jitsu, dude. Or at least I live with a jiu-jitsu teacher. And he will *really* mess yo face up, fa realz yo. Facial scrub.

Nothing like 'Try A Little Tendeness' by Three Dog Night to get you going on a Monday afternoon. Oh, if you could only *hear* my solo!!!

You know what *really* p.o.'s me? These stupid little silver hairs that I keep having to pluck out. Who has like 5 silver hairs? Am I supposed get my hair dyed for FIVE hairs? And even worse if I pluck 'em, because they're small and I ended up taking out all the hair AROUND them, so there's a bald spot. I look like I got attacked by mockingbird. Flipping mockingbirds. Worthless!

This Friday night May 8th, 2009 at 7:00 p.m. at the Maude Cobb Convention Center in Longview Texas, there is going to be a very special benefit concert event for one-year old childhood cancer victim, Zoee Loissa Smith, or “Baby Zoee” as many folks refer to her

Zoee is a 1-year old little baby girl from Longview who contracted cancer at the age of 6-months old and has now undergone several operations and chemotherapy for the past 8 months at Children’s Hospital in Dallas and continues through these things today… which is a miracle in itself.

This Friday, Mark Cooke & The Cooke County Line will be performing live plus your ticket will include a buffet dinner provided by Jalapeno Tree Restaurants. This event will be a banquet type, seated intimate setting that will be great for a special date night out or even a perfect Mother’s Day present for mom and all for a very worthy and needed cause.

Tickets are on sale Wednesday and Thursday at Cavender's Boot City on the loop in Longview and then available Friday at the Maude Cobb box office. Please join us for this unique dinner style concert and dance as we gather together to help Baby Zoee and her family fight her struggles with childhood cancer.

For complete details about this event, visit http://www.babyzoee.com

PS: PLEASE HELP ZOEE BY REPOSTING THIS TO YOUR FRIENDS. THANK YOU.
Posted by Ashley H. at 9:08 PM 1 comment:

Please move on. Nothing to see here. Do NOT look at the accident.

What do milk on the floor, chest in beans, evil looks from church-goers, proclaiming “I tooted!” and pulling pants down have in common? They all happened during lunch today at a local tex-mex restaurant. Apparently *someone* (i.e. ME) hasn’t learned that taking kids to restaurants? Yeah. You just DON’T do that. Because then they go and do stupid things, and you don’t get to even breathe, much less TASTE your food, and the entire time you’re worried about what they’re going to do next, or who’s going to say something to you, or roll their eyes, or ack! Judge you for being a bad parent, no parent at all, or *even* look at you like you might be…you know…*ahem* gaaaaayyyy. Right. Because I’m not. Morons. For serious.

After church this morning a friend and I went to lunch, and took most of my kids with us. Mistake. It was already crowded with people; everyone getting out from church. I’d say the first 5 minutes went pretty smoothly, and then I had to go and get all excited, and that pretty much ruined it. The waitress brought Violet some milk in a cup with a lid. I thought about pouring it into her sippy cup, but she seemed pretty content with it the way it was, and I figured it would keep her quiet. (For future reference, go ahead and *think/figure* on things a bit longer…it won’t kill you.) Hmmm….I guess it kept her quiet. Shortly thereafter the milk was airborne. Niiiiicccceee. Insert hateful looks from people who wonder why I can’t control my child. What do they want from me?!?!?!! I cleaned up my mess. Geesh!

After this, the events get fuzzy. After all…it *has* been at least 12 hours ago that this happened, and I have *severe* short term memory. Now what was I talking about?

Violet doesn’t have any recollection of last week’s events, including BREAKING HER FACE (or maybe she just doesn’t care; and it’s possible that she wants CPS called), so she insisted on standing up in her chair over and over. I bribed her. Threatened her. Spit on her. Okay, don’t get all pissy…I didn’t do that last one. Basically tried everything in the book, just short of duct-taping her to the seat, to get her to sit down. I can see it all now…in slow’mo. She jumps……lands with both feet on the chair….but too close to the edge of the seat….the chair starts slipping backwards…..she starts falling forwards…..fear in a mother’s eyes…..death-rays shooting out of fellow diners eyes…….SPLAT! Chest in beans. Next?

The entire time this was going on, three girls came and sat at a table across from us. I’m guessing they were in their late-teens (15-17ish).They were all dressed nicely, and I figured they just got out of church like most everyone else there. A few minutes later, what I’m *assuming* was their mother, came and joined them. The judgment began. At first I didn’t pick up on it. Just felt sorry for them that they must lead such boring lives, and have been so unaffected by attending church that morning…..that they *never* cracked a smile during their lunch. By the time we got around to ol’ chest-in-beans (sounds like an Indian name, right?) the mother was GLARING. I just thought it was because I couldn’t control the 2 year old, but then we came to realize…..yeah. Going out on a limb, and just *assuming* (I know, I know…what happens when you assume. Whatever.) but she thought we were gay. Which would be great if we *were* gay. But we’re not. I’m sure she thought we were corrupting “our” children, and we’d all be going straight to hell. Lady, if you’re reading this. REPENT NOW! THE END IS NEAR! Just kidding. Next time just ask. Or don’t. It was awfully funny watching her watch us. When one of her poor girls cracked the TINIEST SMILE EVER DOCUMENTED IN HISTORY at us, she elbowed her! Holy sheep piss.

The last half of lunch was nearly as exciting as the first. Our poor waitress, who was great – by the way, got so flustered running around, that she ran into Gracelyn’s chair. Insert nice save by the waitress, and my friend too, I think, that kept Gracelyn in the chair, and her food on the table.

Violet decides she’s had enough quiet time (read: 2 minutes of eating) and wants to play again. She kept trying to drag the chair around on the floor, twirl, sing, play in condiments, etc. until she’d finally had all she could stand, and shouted loudly, “I TOOTED!” That’s what I *always* do when I get bored, exasperated, flustered, etc. Seems to relieve a lot of pent up anxiety. But hey, that’s just for me. Don’t go doing it and blame me for the looks you get. I couldn’t help but laugh. She was making a factual statement. At least she wasn’t lying about something.

Last, but not least! We’re trying to get things rounded up to leave, and Violet’s still bouncing around on the floor. And table. And chair. And my lap. Then she tells me she tee-teed. Great. No big deal. Then she starts pulling her pants down. (And immediately I re-lived the previous day’s events…at a party at the park, with a *bazillion* onlookers, and Violet walking with her pants around her ankles and a diaper in her hand. Hey – she gets that from her Dad.) Fortunately she wasn’t quick enough to get the diaper off this time.

The waitress never brought us our ticket, which *really* surprised me. I would’ve figured she wanted us OUTTA THERE. But no…only the lady with her daughters wanted us out (and possibly all the other diners). I’ve never seen someone eat their food so fast! They were in, ordered, ate, and left, all within 30 minutes. And there were FOUR of them.

Okay, I’m stopping now. There I go being judgmental again.

And that, dear readers, is why you NEVER, EVER, take your children with you to lunch. EVER. NEVER. Or people will think you're gay.
Posted by Ashley H. at 11:12 PM No comments: