And *that's* why I'm Mother Of The Year!

What would a weekend be without crawfish, a potato cannon, flying lessons, a trip to the E.R., and a broken nose? Not a whole heck of a lot. Let me just say…if YOU aren’t experiencing these things regularly, then you must be not be *living*.

Life Lesson #1: Throughout my life, I’ve experienced TONS of exciting, dangerous, and just plain stupid things. Let’s see. Running parent’s car off a bridge? Check. Getting arthroscopic surgery because of injury sustained while TP’ing someone’s house? You know it. Walked runways in Paris? Okay…not exactly. More like 1 in Los Angeles. Skydiving? Owned it like nobody’s business. But the joy, nay – complete fulfillment, from a potato cannon? Never…until yesterday. I’ve now come to the decision that potato cannon should be marketed and sold as a weapon of mass destruction fun for the whole family! Unfortunately I didn’t get ANY pictures of the potato-shooting mayhem that followed, but I will soon enough. I foresee Byron and I spending an afternoon showing our love for one another by making personalized cannons.

Life Lesson #2: Friends are fun. Crawfish is yummy. Mix the 2 together, and you’ve got a recipe for good times. And good times were had by all. I can’t remember the exact amount, but Jason cooked up a good 30+ pounds of those critters with some taters, onions, and corn, and OH MY….*cue* heavenly aroma. OOOOOOOOOOOOOOOOOHHHHHHHHHHHHH YUM. The only thing I’d change in future “crawfish fests” would be to wear PPE…personal protective equipment….because when someone cooks them correctly, they’re HOT. Everything burns…eyes, ears, nose, mouth, lips, and KNUCKLES. Apparently when your hands are already dry (and in desperate need for lotion)…and you use crawfish seasoning for said lotion…madness ensues. I’ve never been in such pain in my life (except for the c-sections. and a few boob jobs. And the time I got my finger stuck in the toilet paper dispenser. Or the time I superglued my eyelid to my eyeball….I digress). 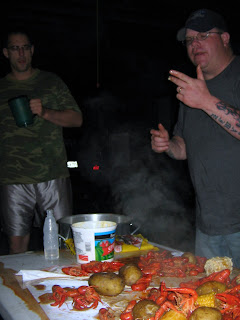 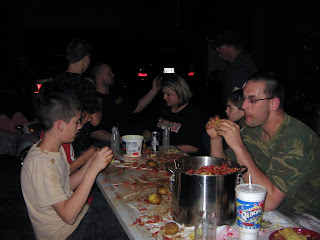 Life Lesson #3: Kids will be kids. They *don’t* need encouragement from parents to jump off objects from 5 feet in the air, say…like….bunk beds. This same adult doesn’t need to show the kids what SUPER COOL action shots they could take on the camera while doing such stunts., and how the parent should probably consider a side business of taking action shots for sporting events. (But I *so* could do that as a side job!) Finally the good parent comes to her senses, calms the children down for a group photo, and advises everyone to do the “smart thing” and get down off the bed. Everyone follows directions well, except for 2 year old Violet, who decides she wants to test out her kamikaze acrobat skills and does a nosedive off the bed….falling, flailing, and landing on her FACE and an angle such that should’ve broken her neck. Honestly. *Cue* crying, screaming, snake-like-not-bulging-from-forehead, and blood from nose. I suddenly decided to be the good mother and grab her up to soothe her, run her over to Byron so he can be equally appalled and horrified, only to hear him say, “Holy crap! She looks like a Klingon!” Really? Our child was near death, and she looks like a Klingon? (Other nicknames thought of later in the evening were Cyclops, Triceratops and Cromagnon Man). After a frantic trip to the E.R., it was discovered that nothing was broken…just nice and bruised. (Or so we thought! Another blog will detail the new news of broken nose, broken cheek, and concussion. Yep, we like to do it right!) 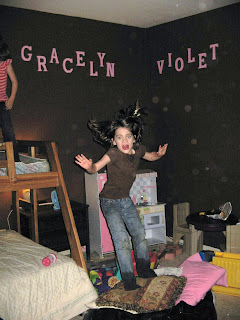 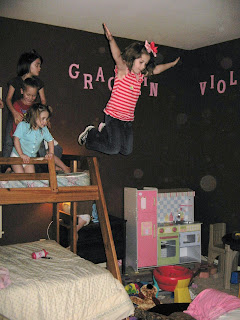 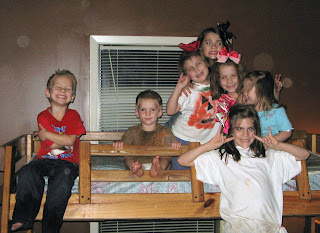 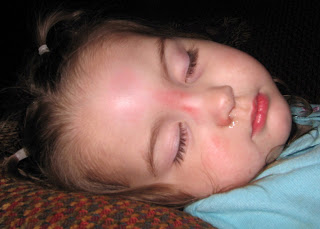 My ingenious brain has suddenly just stopped working, and now I can’t think of any other way to end this post than to just end it. So suck on that.
Posted by Ashley H. at 2:07 PM